Our next dispatch day is Thursday 25th March!

Our driving force is to produce the finest and most ethically produced beef possible, working in harmony with nature and farming in the most environmentally considerate way we can to deliver a sustainable and fully traceable product direct to our customers.

Like all native British cattle, Red Polls thrive on a natural, grass-led diet and do not require any additional feed supplements to mature and finish. Our animals graze exclusively on pasture and live outdoors for as much of the year as the ground conditions allow.

Our soil is quite heavy and can become water logged in the winter at which time we move the cattle into our purpose-built barns where they are fed the hay and silage we have made on the farm during the summer. They are never fed grain, cereals or concentrates.

Wholly Cow animals enjoy a very high quality of life and the meat we produce for our beef boxes reflects this. Calves are born throughout the year and they suckle until around the age of 8 months or older, learning in this time to supplement their mothers’ ample milk supply with our rich Cheshire grass.

Animals take longer to grow when they are allowed to eat a natural grass-only diet and we respect that they are all individual and develop at different rates so we leave them to mature at their own pace. They continue to graze in their family groups for as long as needed, finishing on grass and usually reaching suitable maturity at around two years old.

Caring for the countryside

Feeding a 100% grass only diet means that our farm is predominantly laid to pasture which helps with the capture and storage of carbon and means that our carbon footprint is significantly lower than that of farms where cereal crops are grown to produce animal fodder.

We sow mixed grasses and legumes including clover to aid soil health and of course grazing cattle deposit dung, returning organic matter and nutrients directly back into the land. Manure produced whilst the animals are wintered inside is put back onto the fields in the Spring and we regularly test the soil to ensure we only use chemical supplements when soil health truly demands it.

We have undertaken a regular programme of drainage installation to improve the flow of rainwater across the farm and as part of this we have created two small ponds. We have also planted over 750 mixed trees, hedging and native plants, all these activities combining to maintain a natural environment and support a greater range of wildlife as we strive to restore and protect biodiversity across the farm.

In addition to the visible high standards in animal welfare practices and the many environmental benefits, ever-increasing scientific evidence shows that animals fed on a grass only diet produce meat with increased density and quality of nutrients.

Grass fed beef like ours has been proven to be lower in overall fat, with a higher quantity of Omega 3 fatty acids and a superior Omega 3 to Omega 6 ratio when compared to mass-produced grain-fed meat.

Don’t forget as well that beef is one of the best dietary sources of conjugated linoleic acid (CLA) which boasts significant antioxidant activity and helps protect against heart disease, diabetes and cancer and 100% grass fed beef contains significantly more CLA than beef from animals fed on grain.

All our beef is produced from animals born and raised on our farm which makes our product 100% traceable.

We work with a number of carefully chosen, local, like-minded partners who share our business ideals and value our traditional and sustainable farming methods.

Our cattle are compassionately slaughtered by Edge Butchers of New Ferry, established in 1844 and regularly commended by the RSPCA and other organisations for their ethical work practices and support of rare and native breeds.

Some of our valued hospitality partners include The Art School Restaurant, Liverpool and Harthill Cookery School, Cheshire.

Delivering a quality and sustainable product

We sell mixed beef boxes rather than individual items as this is the most sustainable way for us to use our beef. It allows us to balance how we use the whole carcass and it means that we don’t waste any of the animal. This means that the box contents will vary slightly from week to week but you can choose how much you spend and as we get to know our customers we do our best to give you the best combinations for your family size and preferences.

Our beef boxes are delivered via DPD in a fully insulated and recyclable “Woolcool” cool box. We are still working to find the right packaging in which to wrap the various cuts to ensure it is practical for mailing but also environmentally sound so we use biodegradable trays where possible but we still have work to do to get this right!

All our beef is 100% grass fed but this can mean that the meat may taste slightly different from month to month according to which fields the animals have grazed and the content and quality of the pasture. Grass fed animals produce meat that is usually well-marbled but also tender and flavoursome and we are sure that you will taste the difference but we always welcome your feedback on every aspect of our boxes and want our customers to be Wholly satisfied with their purchases. 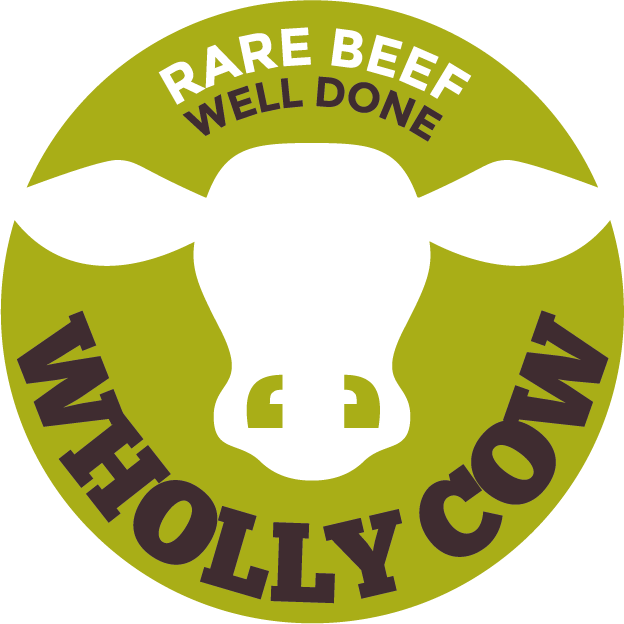